Each drawing is 21 inches x 31 inches / 56cm x 76cm and based on a rendered freeze-frame, complete with video title, user ratings and number of views. The artist duo started the drawings series in 2008.

Dr. Christian Kortmann has been writing about Internet videos since 2006 in his weekly column “Das Leben der Anderen” (“The Lives of Others”) on sueddeutsche.de. His first novel, “Der Läufer” (“The Runner”) was recently published by Blessing Verlag.

Admir Jahic and Comenius Roethlisberger draw images from YouTube videos. They record creatures and things from the flood of Internet images which have become remarkably familiar to us. Sometimes it’s good to take a pencil in hand and write down what really is, what’s true, what must be done – a single note can be more important than days of input. Painting stills from YouTube videos is not as obvious and tested as the pencil stub behind the ear, but an equally comprehensible cultural technique. Because in this way the drawer fixes the incomprehensible volume of clips posted on the Internet portal at an Archimedean point.

Every minute, 13 hours of new film material are uploaded to YouTube, in 24 hours there are 200,000 new video clips. You can at least hold on to a notion of these countless images made up of fleeting time, never to be regained, by depicting a single frozen moment from a single video clip with coloured pencils, like the scrap of coat snagged on park wall, remembrance of a stranger riding by. This creates a sectional sketch like an anatomical atlas, piecework, which brings the whole into sharper focus, makes the flood of images more bearable, because the artist, like the viewer, knows: I have found something I like; anything else that comes along is a bonus.

Swiss artists Admir Jahic and Comenius Roethlisberger dissect this personal imagistic quarry in their series of drawn YouTube stills entitled WITHOUT YOU BABY, THERE AIN’T NO US. When I saw the coloured pencil pictures for the first time as scans on the Internet, they immediately seemed familiar to me, because they derive in a certain way from my own work routine. I regularly write about Internet videos and have to present these articles on the homepage of a news website with a film still and a teaser of two or three succinct sentences which will make the reader want to click on the article. And I always look for the crucial still which represents the video as a whole which, like a visual source code, contains the whole clip within it.

When Jahic and Roethlisberger draw the fastest living beer drinker in the clip “Fastest Beer Drinker Alive! Watch This!”, they choose a scene from about two thirds into the video. The drinker has positioned the almost empty glass with a fixed upper arm and is about to tip it to more than 90 degrees. An admiring extra stands in the background obscured by the arm, standing in for the thousands who admired the scenario online. For the clip “Amazing Dog Birth!!” the artists chose a still which shows the error message which appeared in the black Flash player window: “An error occurred, please try again later.”

Here, too, the temporary imagistic absence of “Amazing Dog Birth!!” contains much of that which constitutes the medium of Internet video. The technical problem refers to the transmissional nature of the clip – although the global film cornucopia is naturally to hand and instantly consumable, images and sounds are still transmitted between distant places – as well its illegal/anarchic nature; after all the moment of intangibility may also indicate that a rights holder has registered a claim. And the title preserves the typical amateurish astonishment about the utterly normal course of the world, which requires the folk orthography of the double exclamation mark.

At first these YouTube drawings want nothing to do with their origins, preferring to be observed live and up close in their location, not on the Internet, is, but on large sheets of cream-coloured paper. Then in the coloured pencil structures you see for instance how the artists take the amusing creature seen in the clip “Dramatic Chipmunk” turning to the camera with a capricious diva gesture, and in the painted version massage against the fur, how they stroke, tame and make it a pet of our minds. Because the subjects of the videos were formerly divided into art and pop notoriety, the drawings demonstrate even more clearly than the Internet original how iconographically formative YouTube’s image fabrications are. That’s why Internet videos are fascinating over and over again: because unlike the cinema or television, the viewer can always count on seeing something of whose very existence he was previously ignorant. People who re-enact the sleepwalking dog, women who buy Tiddy Bears, men who jump backwards into swimming pools or film their shoes while they step on the gas pedal. Even chipmunks are now a cultural reference.

Admir Jahic and Comenius Roethlisberger say that they “want to make the digital dirty”. Everything is drawn without stencils, the details are raw and coarse-grained, there’s not a right angle to be seen, there are judders and jerks familiar from the usual server capacity problems you have at home. The media of Internet video and coloured pencils may seem completely different at first glance, but it is logical that they should encounter one another. Because behind the strictly formal frame of the embedded YouTube interface is the user’s urge to self-manifestation, which they scribble down with their highly personal coloured pencil messages to the world and summon all the image and sound invention. Internet videos are digital variations on graffiti art, where anonymous artists meet an anonymous public in a public place. Have Messrs J and R perhaps considered using a spray can for their next YouTube “Drawings”? The further the visual distance between viewer and work, the more the scrawled characters in the drawings smooth out, becoming once again the familiar medial preview image, all interactive elements are present: time bar, ratings, number of plays. If the observer is unfamiliar with the clip depicted, the title and motif may seem mysterious, such as “How Not To Be Seen” above a scene depicting the edge of a coniferous forest with a yellowish object in the foreground – and when you then see that this clip has been awarded the highest rating of five stars, it can really arouse the curiosity. But unfortunately you can’t click on the paper. The interplay of the learned functionality of the play button and the wonder preserved in the artisanal/artistic approach have the effect of making you want to enter the video title in YouTube straight away to see the whole story unfold.

With the series of drawings “Without You Baby, There Ain’t No Us”, Jahic and Roethlisberger may stop the image machine for a moment, but in the background it has been shovelling in ever greater masses of material. The only follow-up to these quiet, unmoving pictures leads back to the swarm of YouTube. Who’s ever been satisfied with a stuffed pet? 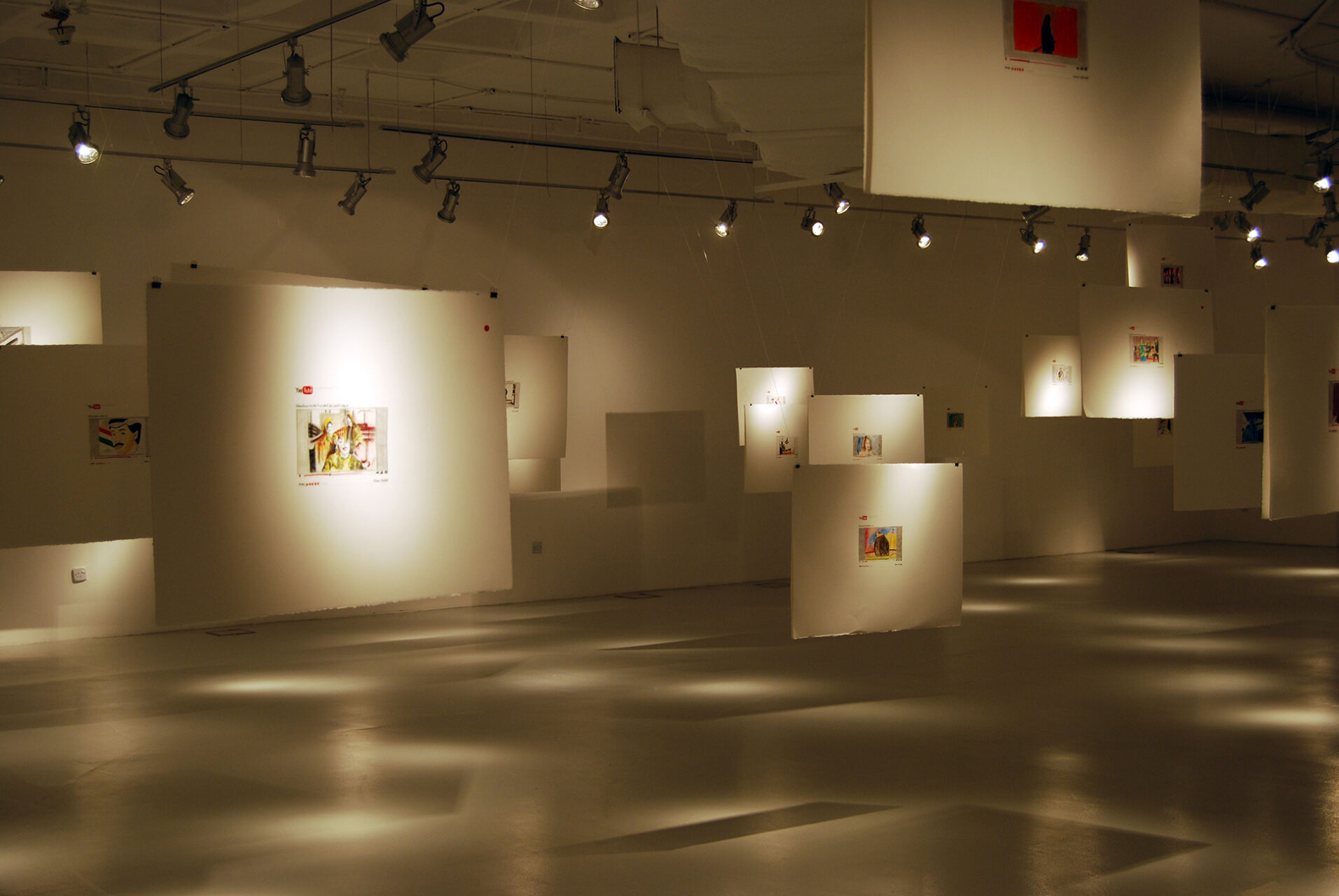 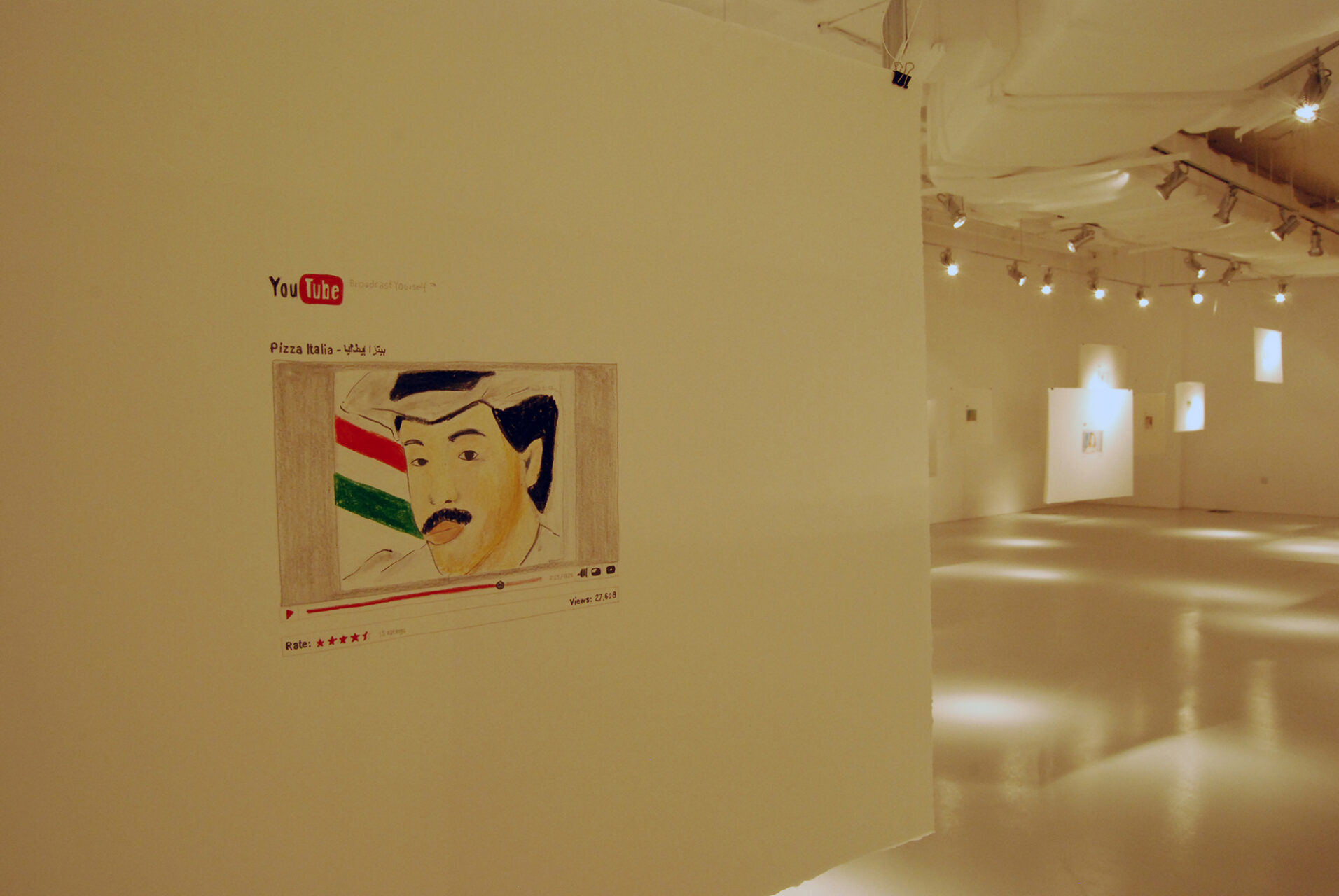