Where would we be without chance! Countless scientific advances and findings would remain lost to us if chance hadn’t come into play at just the right moment. But how does this come about, and might it perhaps be brought about? The moment, that is, in which something new, something unknown becomes visible.

Admir Jahic (b. 1975) and Comenius Roethlisberger (b. 1971) repeatedly provoke the workings of chance. They deviate from familiar pathways and create conditions for chance events in order to embark on a journey of artistic discovery. Of course one might argue that the mere fact of working as an artist duo can sometimes be a journey of discovery in itself. For Jahic and Roethlisberger, it is a condition that they continually engage with the new, questioning and challenging each other. For them it is a chance to depart from the familiar.

This may be what motivated them to spend a long period fundamentally analysing their own artistic activities as well as their collaboration, clearing out their studio, putting to one side what had already proven itself – and even respected and well thought of – and with open minds exploring the question of where they actually stand, artistically. The two have been working as an artist duo since 2008, and develop their works not on their own, but jointly. More than that – they each allow the other to intervene in what has presently been created, to change it and so push it to something other than what had been planned. Extensive work series have arisen from this dual process. In recent times, especially, both artists seem to have taken this artistic stance even further. On their studio wall there is a large number of framed images that show coloured shapes merging into each other – a mix of synthetic resin and highly coloured pigments that bond to greater or lesser degrees. You might be able to discern figures, and yet the colour combinations are always the result of planned gestures, unplanned procedures and chance results.

The duo describe a process that you can readily imagine: in the studio a huge number of large-format sheets are laid out, protective masks and suits are donned, and then it begins. In what seems like a rapid, performative act, each of the artists takes the liquid synthetic resin with different pigments, letting it either glide on to the blank paper or intervening in an existing gradient with an additional colour mix. It may sometimes transpire that one or other of these gestures is written over and fundamentally changed by the other. No discussion, no arrangement. All of the works are created at the same time. There is an almost lab-like situation here in which two rhythms, two temperaments, two conceptions and ideas come together to form one work. Then – that’s it. The masks are removed, the windows opened and the results are observed and evaluated. That may mean whatever has arisen from the interplay of materials, but it may also mean what has arisen from the encounter and actions of the two artists.

Processes such as this are typical for the work of Jahic and Roethlisberger. While many of their works and processes are based on the calculable and measurable and not infrequently follow the laws of physics as well, the artists are interested above all in things that emerge suddenly. The accidental, an apparent mistake, the reaction of materials, but also the reaction of one to the other. All of these aspects are not just allowed, they form a part of the artistic process.

For the series Noire, Noire from 2017, on the other hand, the two artists draw on an artistic process that they have already used in an existing series under the same title, but now realise in new formats and in an expanded form – polyester resin and black pigment are applied in equal quantities to round sheets of glass of between 40 cm and 170 cm diameter. Where previously the material was distributed across the glass surface by pressing a second plate as a counterpart, the artists now intervene in a gestural way. Only afterwards do they press the two glass plates together precisely and let the works dry.

The results are a surprise for the artists themselves. No one work resembles another. Different progressions and arrangements can be seen each time. The bubbles that form between the two plates during the drying phase or even in the moment they’re pressed together create their own, unforeseeable structure. The pigments may compress further and make the glass almost opaque, sometimes there is nothing more than a trace of material between the glass plates, which appear transparent and diffract the light.

With some artists, one wonders whether their creative processes invite the capacity of incorporating both the purposeful and the accidental and thus also allowing for chance, and even failure. For Jahic and Roethlisberger it appears to be not just a condition, it is the most important precondition and is therefore consciously incorporated in the creation of their works. Therefore it is hardly surprising that within the artist duo, each of the two extends so much trust in the other’s intervention in the work at hand. After many years of collaboration they may well have developed a sense or even knowledge for how the other will respond. Therefore Jahic and Roethlisberger have asked artist friends to provide a form of artistic response or reaction to their own work. Whether that leads to an exhibition or even a whole new collaborative work remains to be seen. To paraphrase the apt words of the ancient Greek statesman Pericles – the prerequisite for freedom is courage. 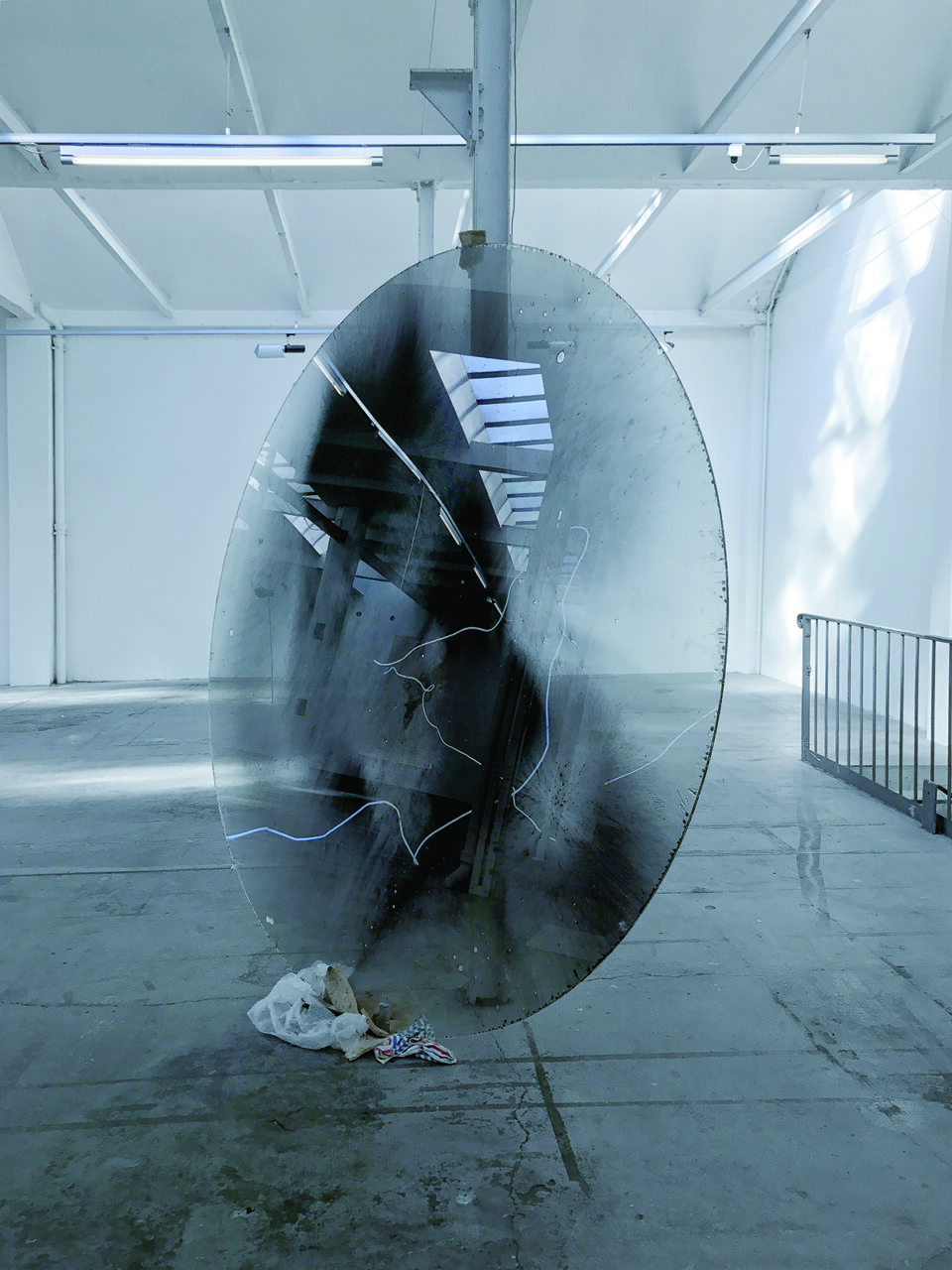 2015 we began the work group “Linien” (“Lines”). The lines are a performative act. In these short performances we both draw a line at the same moment with a chalk. While one draws a line from top to bottom, the other holds the sheet and creates the line from the other direction. We stand opposite each other, and so the upper part of the sheet is the bottom for the other.

In executing these images we respond to each other’s actions in accordance with the reciprocal principle of action and reaction. These performances lead to unpredictable lines. Although the result of each individual experiment is accidental, frequent repetitions give rise to identifiable regularities.

The line has captured our imagination. Millions of lines are drawn every day, there is something fundamental about them, the starting point for sketches, texts and ideas that have formed our world. Lines join, lines divide. We use them as a tool to create new forms and at the same time to investigate our own collaboration and its mechanisms. The lines, of which we may draw a few hundred in a session, are transformed into sculptures in neon and other materials. Some of the lines are displayed as drawings. 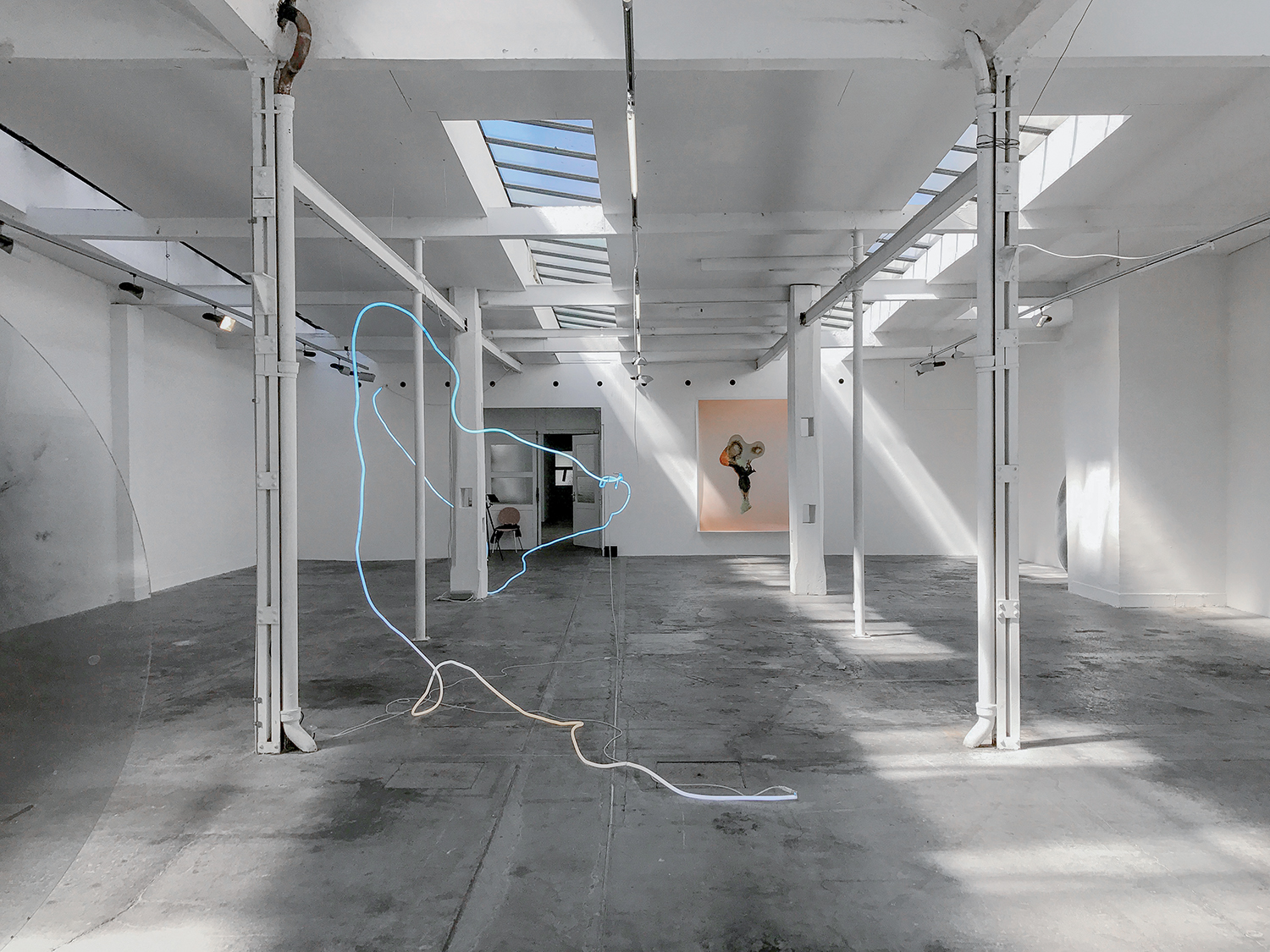 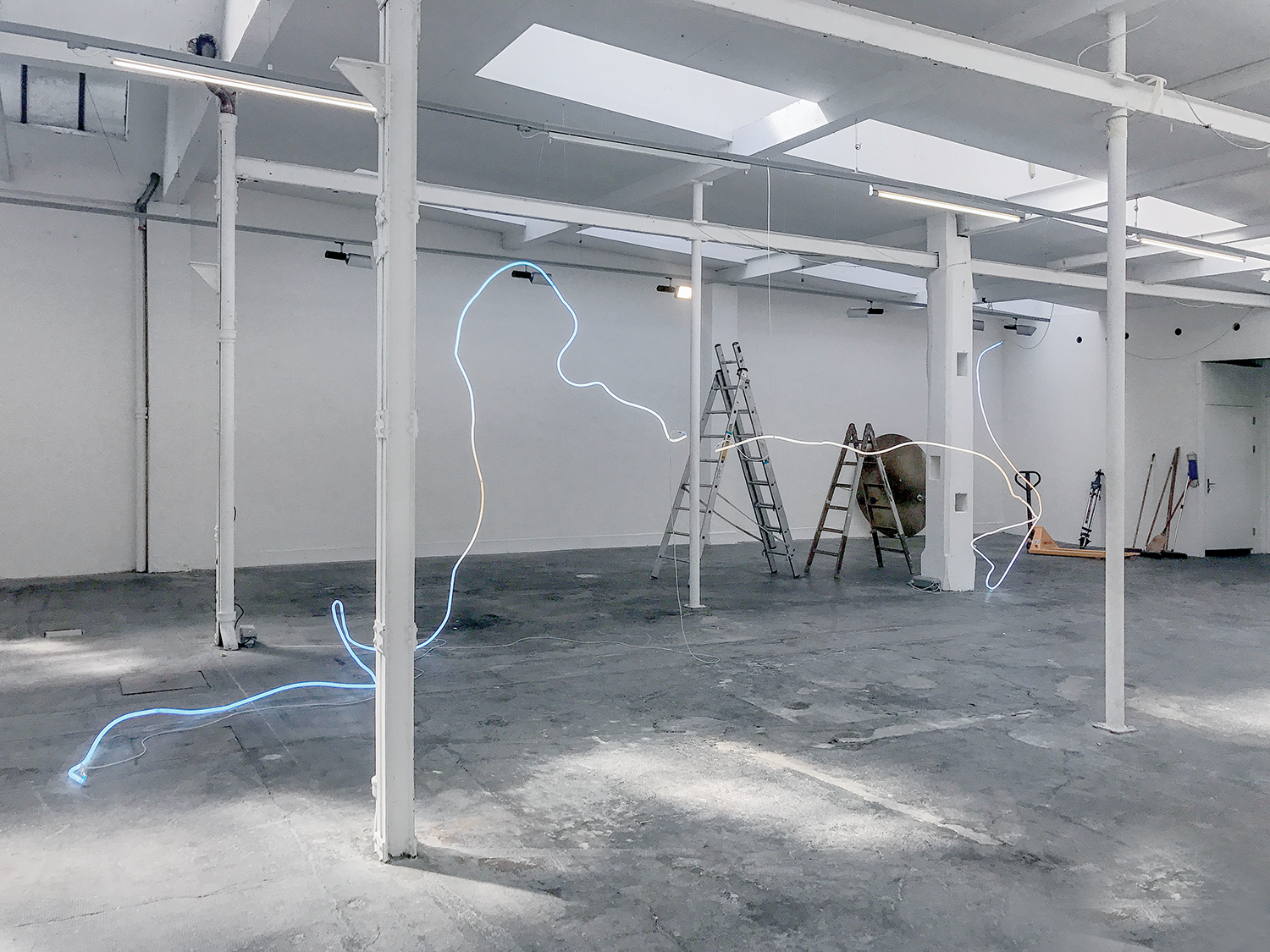 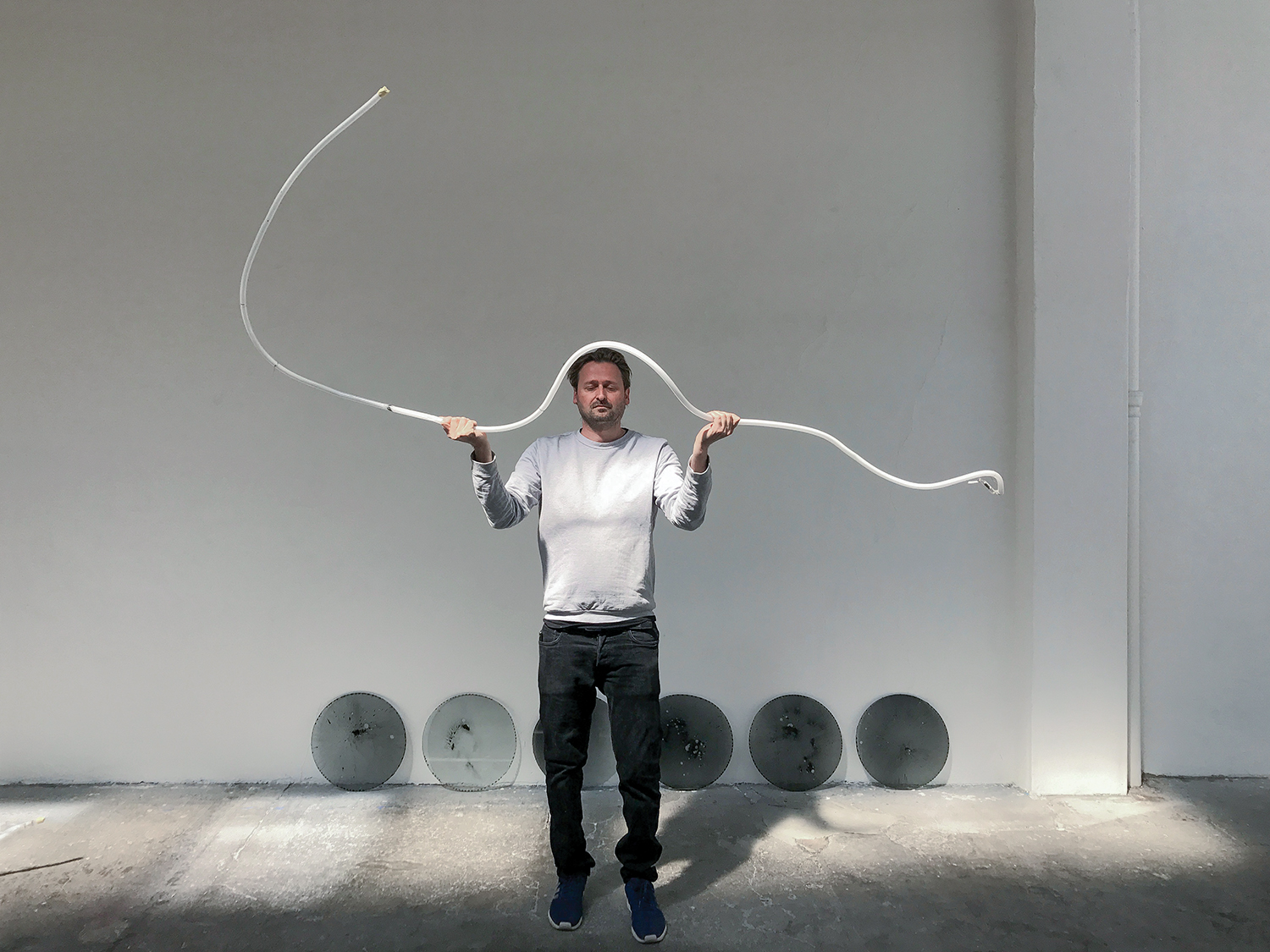 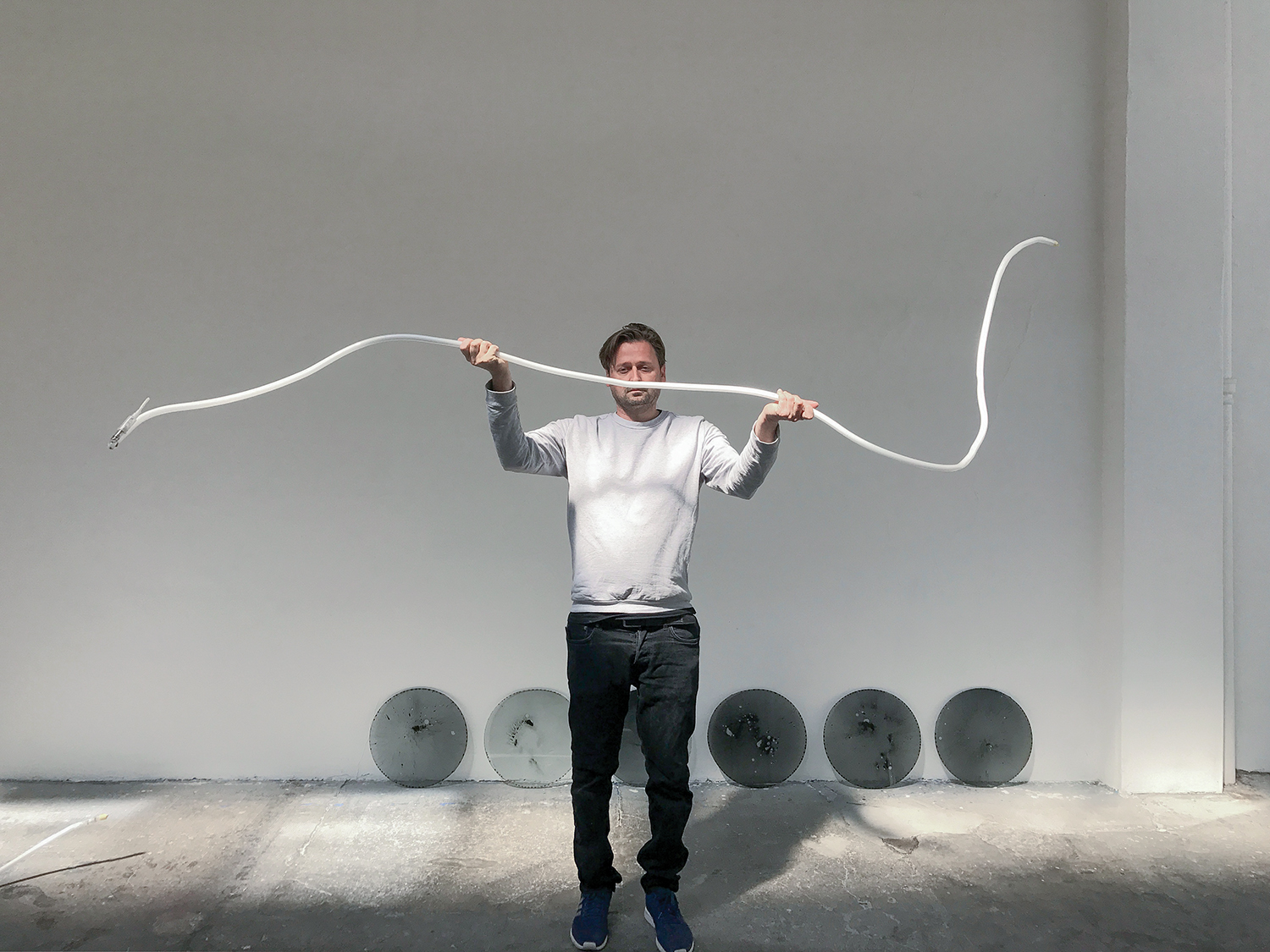 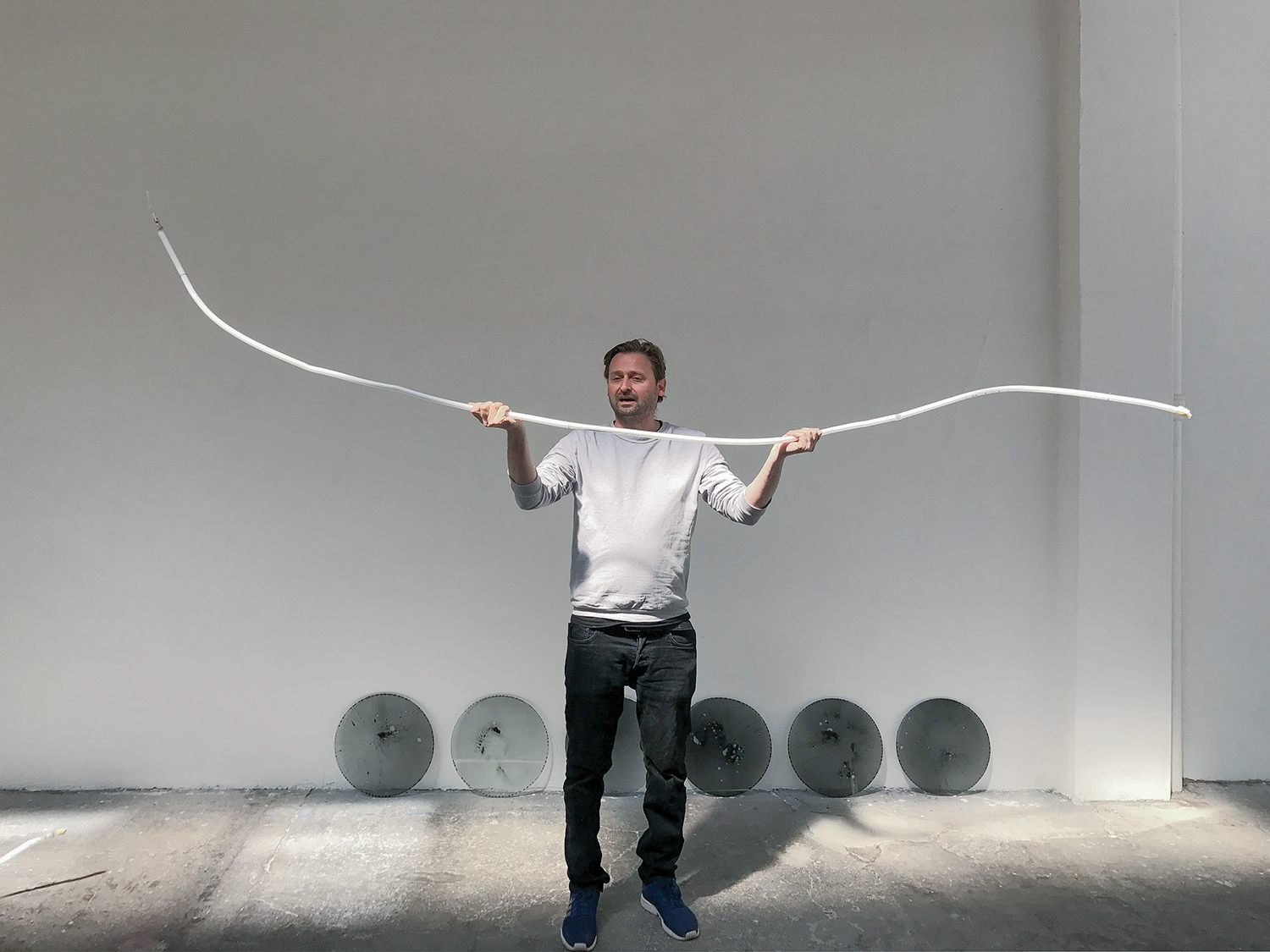 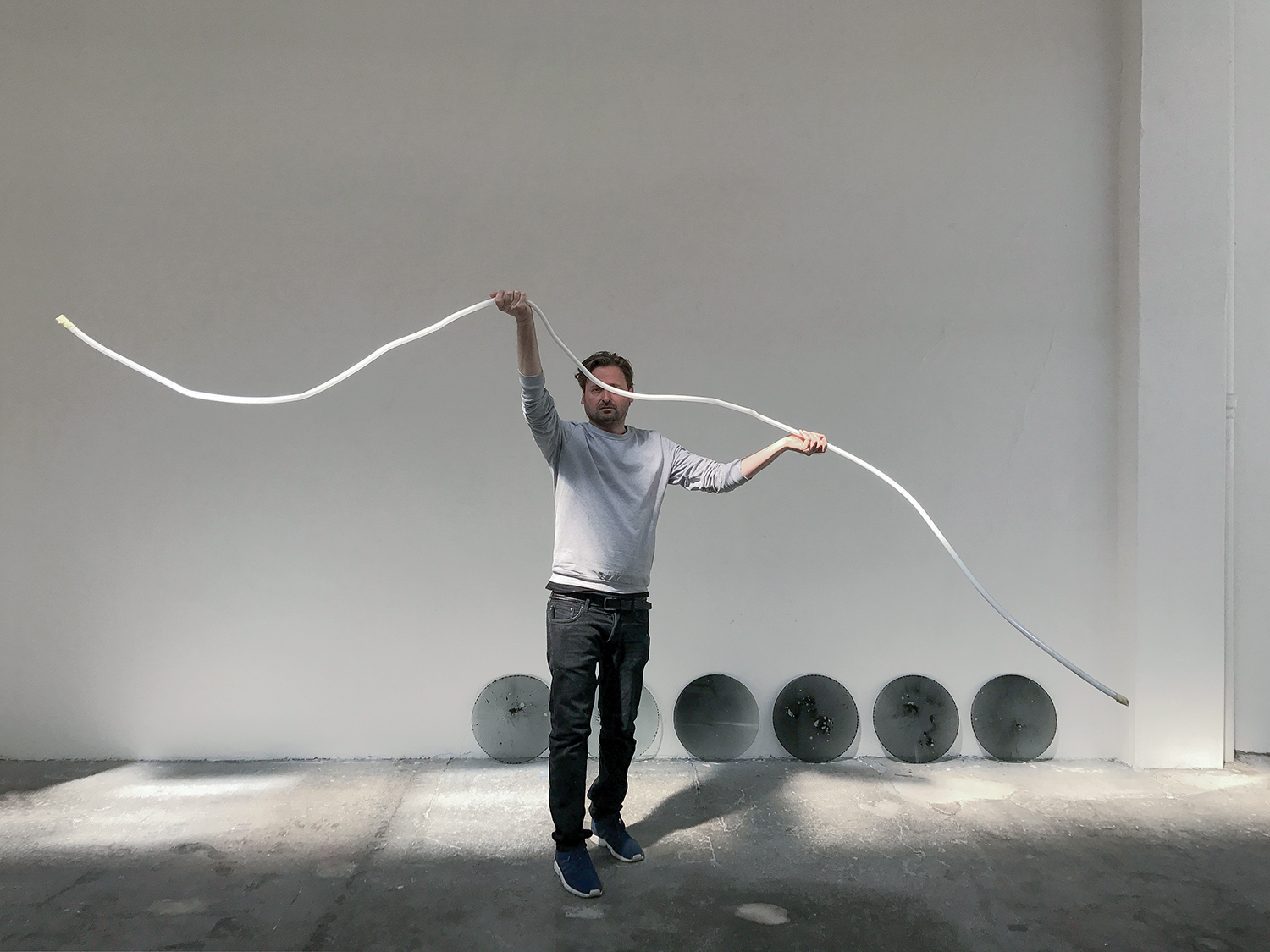 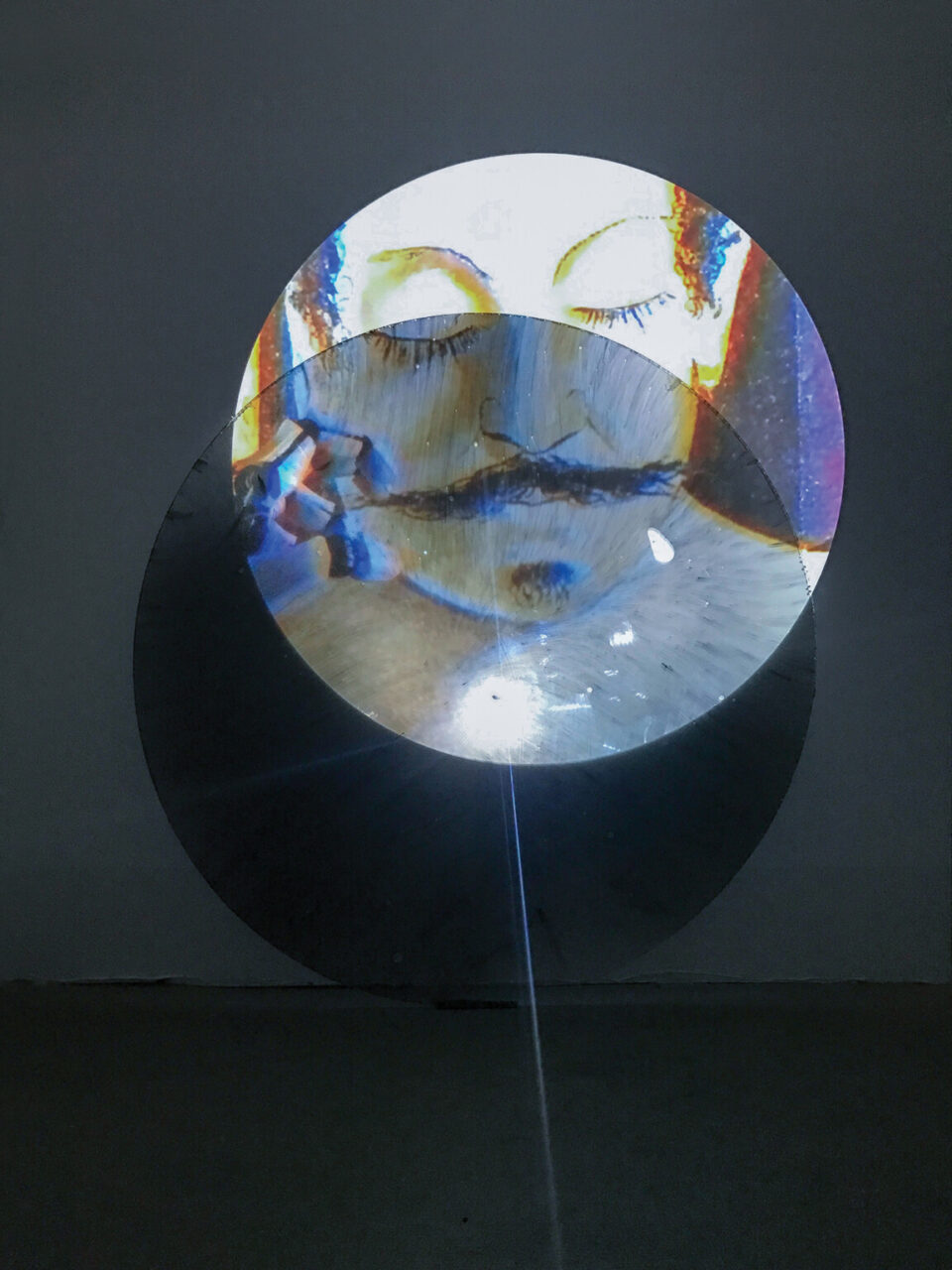 With his ambition of rather exploring multiple viewpoints simultaneously than presenting a singular approach to reality, Christian Andersson incorporates fiction into the real world within his installations, videos and drawings. As a point of departure in art and architectural history, popular culture, literature, and the canon of western civilization, Andersson offers a space for meandering thoughts, and explores the boundaries between the plausible and implausible, juxtaposing emotion and reason.